Sometimes terms that are used as both nouns and verbs can get confusing. While this is not a grammar lesson, this edition of Technique Tuesday tackles three more cooking and preparation terms that are both nouns and verbs; Grill, Fillet and Whisk. We’ll help you understand how these terms in their exact same formulation mean different things and how they relate to each other. 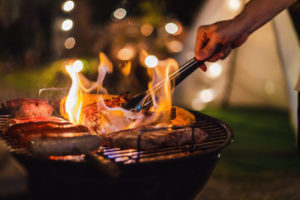 Grilling (verb) is one of the most primitive cooking techniques known, regardless of all the grills and grilling gadgets there are. It’s a technique that is less precise than stove-top cooking. This is due to the differences in the design and performance of various grills (noun), the use of live flames and environmental conditions (weather).

Many people interchange the terms ‘grilling’ and ‘barbecuing’. However, they are very different cooking techniques. Grilling is used with smaller quick-cooking foods such as steaks, chops, and skewers, and primarily takes place directly over coals or flame. However the term can also reference a flat top griddle or ‘flat top grill’.

Grilled foods derive their flavor from the dripping juices and fat that hit the heat source, creating smoke that subtly seasons the exterior of the food. The high heat of the cooking surface that touches the food also chars the product. This gives grilled items a distinct flavor. Barbecuing on the other hand is typically reserved for larger, bulky cuts like brisket or pork shoulder. It uses a low-and-slow cooking method that requires indirect heat. Barbecued foods derive their flavor not organically from the food itself, but from wood chips or larger pieces of wood. This wood generates a deep, intense, woodsy smoke that infuses the food. Dry Rubs, Brines and Marinades also contribute to flavor when barbecuing.

Grilling is a fun and easy way to enjoy foods without having to stay indoors. We’re doing enough of that already. So it’s time to get your grill, the noun, ready for some action.

To learn more about grilling, including how to use a charcoal and gas grill correctly, check out our online cooking class Introduction to Grilling. You’ll also find great recipes for Grilled Steaks with Chimichurri Sauce, Grilled Bone-In Chicken Breasts with Chipotle-Orange Glaze and Grilled Salmon with Olive Vinaigrette. The term ‘fillet’ isn’t exclusively related to fish…although it can include fish. As a noun, a fillet is defined as a ‘fleshy boneless piece of meat from near the loins or the ribs of an animal’, such as a chicken breast, beef tenderloin, or yes, a piece of fish. As a verb, which is how we are defining it today, filleting is the act of cutting a thicker piece of boneless meat, poultry or fish into thinner pieces.

When filleting a piece of meat remove any gristle or fat before cutting-not necessary when it comes to fish. At times it may help to put the cut of meat in the freezer briefly before filleting. This helps make it firm and not slippery, avoiding the possibility of knife slippage. Begin the cut in the middle of the thickest part and continue all the way through the piece, using small motions. You may want to lift the top portion every so often to make sure that your two portions are evenly sized. After-the action of-filleting you now have fillets–the noun. Fillets are great for using in quick sautees as the protein cooks faster and more evenly.

You can learn more about filleting in our Advanced Knife Skills cooking class. It’s a great way to learn and practice all types of cuts including julienne and brunoise, removing fish skin, segmenting citrus, and more! Some recipes ask you to whisk (verb) ingredients. While most people own a whisk (noun), it’s purpose and use do have importance.

Whisks are utensils made of thin metal wires formed into loops. The term ‘whisking’ means blending ingredients together quickly or incorporating air into ingredients, such as egg whites or heavy cream. This motion increases the volume of the mixture. America’s Test Kitchen tested various types of whisking and found two to work best in the most common scenarios of emulsifying vinaigrette, and whipping cream and egg whites into stiff peaks: side-to-side and beating (or looping). Side-to-side was found highly effective for all three of these examples. Beating however, was also discovered as an equally effective way to whip egg egg whites into stiff peaks.

As you can see, some culinary terms have both noun and verb definitions. And while culinary lessons are far from English lessons, the same terms with varied meanings can get confusing. So, whether you’re using a grill for grilling chicken, filleting a chicken breast to create a fillet for the perfect saute or using a whisk for whisking egg whites for a souffle, you are now armed with the proper terminology and techniques, perfect for each task.