What is Haute Cuisine?

It’s nearly impossible to be part of the culinary world, particularly its French-inspired niches, without hearing the term “haute cuisine.” But for many, this term is often associated with a certain elusive ambience, rather than having a concrete definition.

Let’s talk through what the haute cuisine movement is, where it originated, and what it looks like on today’s culinary landscape.

Haute cuisine is a French term that literally translates as “high cooking.” When you picture fine dining in high-end restaurants today, chances are you’re thinking of some of the key elements of haute cuisine.

When it comes to ingredients used in a haute cuisine establishment, you’re probably going to see only premium meats, dairy, vegetables, and herbs — all sourced from high-quality suppliers. And the preparation of those ingredients? Chefs trained in haute cuisine will employ complex culinary techniques, like advanced knifework and multi-layer assembly. 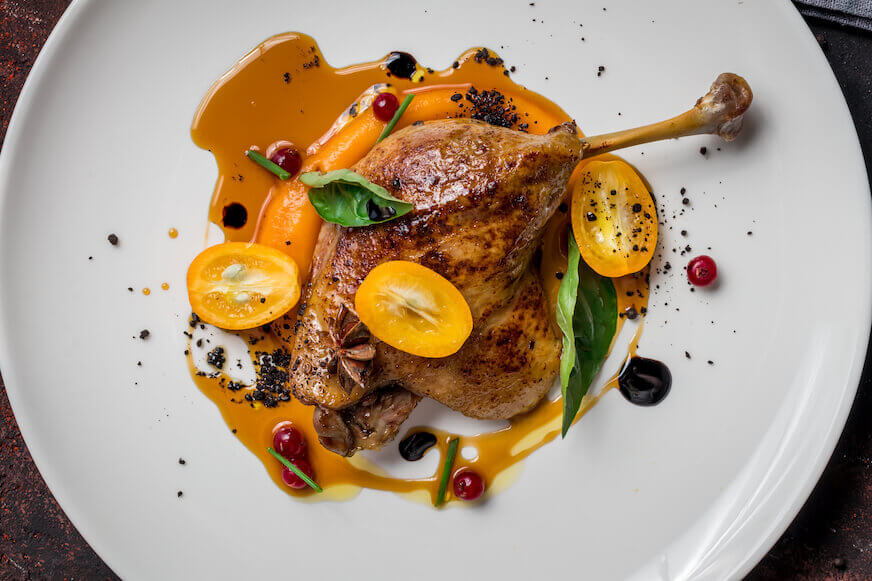 Then there’s the taste to consider. Haute cuisine features pleasurable and harmonious flavors, with balanced seasonings and rich sauces. There’s typically nothing wildly spicy or overly sweet involved in haute cuisine as the focus tends to be on symmetry and equilibrium, making the meal a smooth and agreeable experience.

Finally, there’s the presentation factor; haute cuisine is nothing if not elegant and artistic, with meticulous arrangements and small to moderate portion sizes.

This discipline has a fascinating backstory. It’s undergone many iterations with various historical influences, evolving over the ages to become what we now know as modern day haute cuisine.

Initially, haute cuisine was enjoyed only by French monarchs and the bourgeoisie in the 1600’s. Prior to the movement, portion sizes tended to be grandiose, but that changed around the time that French Chef François Pierre de la Varenne was working for Marquis d’Uxelles, a French general and Foreign Minister. La Varenne prepared dishes in smaller portion sizes than were previously presented, using higher-quality ingredients.

Varenne’s popularity gave rise to French cuisine’s new focuses on taste, premium ingredients sourced out of season and from other countries, and more extravagant methods of cooking and assembly. There was also a heavier emphasis on the use of rich, flavorful sauces.

Other chefs like Antonin Carême influenced the movement as well. In fact, he and Varenne published cookbooks, like the famed L’art De La Cuisine Française Au Dix-Neuvième Siècle and Le Cuisinier François, documenting many of the recipes and culinary practices that many chefs still use to this day. Escoffier and His Cuisine Classique

At the turn of the 20th century, Auguste Escoffier had an immense influence on shaping haute cuisine as we know it today. The entire purpose of Escoffier’s brigade de cuisine, or the highly trained hierarchy of kitchen staff, was to successfully prepare the fine dishes and elaborate presentation that was defining this type of cuisine.

During Escoffier’s time, haute cuisine was still a hallmark of the wealthy, and inaccessible to most everyone else. After all, it was the monarchs and upper crust of French society who could afford to staff a kitchen, provide the tools and equipment necessary for preparing the exorbitant dishes, and obtain the ingredients used for this type of lavish dining.

Escoffier’s specialized line of staff and practice of service à la russe (serving dishes in courses rather than all at once) became known as cuisine classique.

In the 1960’s, a generation of chefs revolted against many of the facets of haute cuisine, forming a movement that came to be known as nouvelle cuisine. This newer type of cooking focused on the freshest ingredients — including those both local and in-season — in more minimalistic dishes with fewer seasonings and sauces, plus reduced cooking times.

Over the past several decades, modern day haute cuisine has become a hybrid of these two variations, maintaining its emphasis on palatable flavors and expert technique, while also prioritizing fresh ingredients found in-season. Today, many culinarians dedicate their careers to preserving haute cuisine and expanding its reach. The Disciples Escoffier International are a group focused exclusively on discussing French haute cuisine and uniting culinarians — from professionals to students — through organized events.

As far as foodservice establishments themselves, the entire Michelin Star grading system for restaurants is predicated on the successful execution of haute cuisine. This prestigious designation is earned when a restaurant uses the highest-quality ingredients, incorporates specialized cooking techniques, and presents food that is deemed to be of superior taste.

Hospitality establishments serving haute cuisine are thriving. For instance, high-end hotel chains like The Ritz Carlton offer guests one-of-a-kind dining experiences in world-class restaurants, as well as hosting the globe’s top chefs for culinary events centered around haute cuisine. Omni Hotels & Resorts has many sites where executive chefs are growing their own herbs in onsite gardens, curing their own meats for charcuterie, and even tending beehives that produce the honey they use in restaurant dishes.

And many restaurants utilize the central tenets of haute cuisine — some without even acknowledging it. For example, using fresh, high-quality ingredients is a principal practice in the farm-to-table movement. And most fine food service establishments heavily focus on presentation of the dish — another characteristic of haute cuisine.

While some feel strongly about sticking closely to the early foundations of haute cuisine, like Michelin Star restaurants and high-end hotel groups, many have woven the movement’s influences into other types of cuisine or restaurant concepts.

In fact, there’s never been a better time to learn the foundations of haute cuisine, as many restaurants and other hospitality establishments are looking to stay competitive and draw in business with high-quality food service.

You can start exploring your favorite dishes and their histories with Escoffier’s online cooking classes. Ready to pursue your passion even further? Look into your culinary degree or diploma options from Auguste Escoffier School of Culinary Arts.

Want to read more about the origins of your favorite foods? Try these articles next:

This article was originally published on October 20, 2014, and has since been updated.