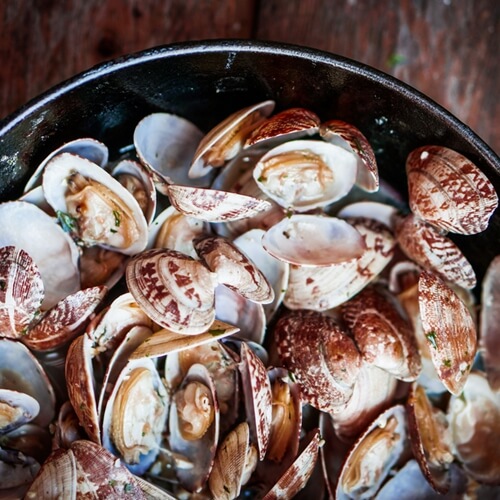 Preparing different foods often presents an array of challenges. Beef should be tenderized, poultry requires de-feathering and fish needs scaling. Presenting a whole other set of challenges are foods like clams, oysters and crabs, all of which require shucking, or removing the thick outer shell. It doesn’t have to be more difficult, though, and with the right tools and technique, anyone can be serving up savory seafood in no time.

Shucking clams
As chef Matthew MacCartney explained to Edible Rhody, shucking clams is all about the technique. Such methods begin with a good clam knife, as the bent tip is made for getting between the clam’s two halves. Still, a knife is only as good as how a chef uses it, and the clam needs to be angled properly to maximize efforts. Always place the clam between the thumb and index finger of the dominant hand before inserting the knife. Once the knife’s reached the halfway point, twist and separate, which should leave enough space between the halves to cut the abductor muscles, located on the clam’s hinges. Once the muscles are properly detached, use the knife to loosen, not cut, the clam meat from its shell; if done properly, it should slide right out. For those worried about slippage, wear a glove or use a towel to better stabilize the clam. Regardless, be cautious of all movement: Tapping a clam will cause it to tighten up, exacerbating the removal process.

Shucking oysters
A lot of the same principles of shucking clams can be applied to oysters, according to Fine Cooking, though there are some notable differences. As Bon Appétit notes, oysters are especially prone to spoiling, get them on ice immediately after purchase. Oysters are also quite messy, so a towel is usually mandatory. Keep all oysters chilled right up until shucking; even a few minutes can effect the overall savoriness. Oysters are also much more difficult to open their sea-faring counterparts, thanks to those extra dense shells. As such, it’s important to use the much broader oyster knife, which is a more fitting tool for separating the oyster’s halves through an opening in the bottom. Be warned, though: The shell tends to crumble fairly often, which will require re-inserting the knife and starting again.

Shucking crabs
For crabs, the shucking or shelling process is noticeably different. Always shuck after the crab has been cooked; it’s not worth the added effort trying to break that sturdy shell beforehand. Once fully cooked, it’s time to remove the crab’s limbs, namely the legs and claws. In many ways, the belly of the crab is often the easiest to open, normally requiring the force of two thumbs. Once the crab’s opened, though, it’s going to require scissors. As he explained to Popsugar, chef Matt Accarrino prefers using sewing scissors, as the angled blades are perfect for tackling the crab’s body. Remove the sand sack (the fleshy bag containing dirt and debris) and then use the scissors to cut the tendons connecting the meat to the shell. Put aside the body meat and then move onto the legs; similarly, the sewing scissors are perfectly suited for cutting these limbs in half and removing the meat from within.