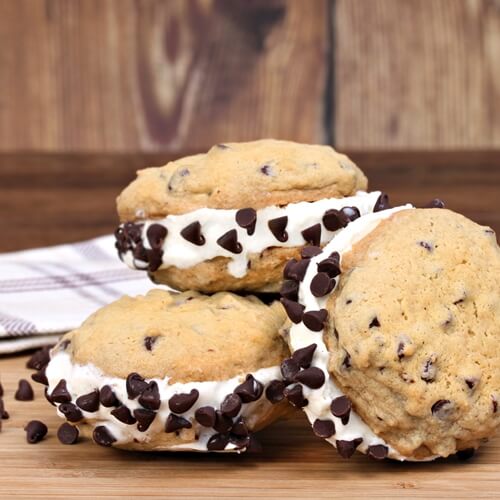 As far as cooking is concerned, a dish’s overall synergy, that is the cohesion between core ingredients, is crucial. It’s the reason why, for instance, the grilled cheese is such a beloved dish, as the bread and cheddar marry perfectly together. Another such celebrated treat with great synergy is the ice cream sandwich: With rich ice cream stacked between two chocolaty cookies, these sandwiches are like double the dessert all at once. Yet even old favorites deserve new life, so here’s a few fresh approaches to tinker with during a culinary arts programs.

Ice cream sandwich with donuts
Cookies are the perfect choice for an ice cream sandwich because of their mix of sweetness and light, fluffy textures. For something even more airy, some chefs have experimented with donuts. The hole in the middle might cause spillage concerns, but the mixture of savory dough and extra sweet ice cream is worth almost any mess. To experiment even further, some kitchen gurus have created the Milky Bun, in which the ice cream is placed inside (much like a jelly donut). The draw with the Milky Bun, then, is that the two components are meant to blend more effectively together. The process of sealing the ice cream into the donut, often done with a waffle iron, also melts the ice cream slightly, which is then better absorbed by the donut.

Macaron ice cream sandwich
Though tasty, macarons crumble quite quickly, notes iFood.tv. Even with the frosting between halves, meant to both add flavor and structural support, these cookie-like delights are still quite delicate. As a way to address both issues, some chefs have played around with removing the frosting entirely in favor of ice cream, a lighter option that maintains better separation. In regards to actual taste, the sweetness of ice cream is a pleasant compliment to the extra soft textures of most macarons. For the best results, it’s a good idea to soften the ice cream beforehand, which will make it all that easier to spread. For anyone feeling extra playful, try drizzling the macaron with either hot fudge or a whipped topping.

Waffle or pancake ice cream sandwich
Who says the “bread” of an ice cream sandwich has to be another dessert? Pancakes and waffles are just as fluffy, and yet they add a few different taste options to the equation. There’s two basic methods to go with. While it is possible to whip up standard pancakes or waffles, it is then wise to choose the appropriate ice cream. Opt away from chocolate or mint-based ice creams and try something complimentary, like apple, blueberry or cinnamon ice cream. However, if the ice cream’s got to be something rich and decadent, try cooking up some chocolate pancakes or waffles. Dark chocolate is usually best, but it always depends on what kind of ice cream is served. For a healthy spin on either recipe, replace the ice cream with mashed banana or a fat-free yogurt.

Croissant ice cream sandwiches
Though croissant ice cream sandwiches are a fairly new concoction, they are based on recipes for similar treats from various Asian cultures, notes SilverChopstix. Vendors in Singapore will put ice cream on pandan bread, while ice cream in the Philippines is served inside Pandesal bread. Croissants have a number of characteristics that make them great for sandwiches. On the one hand, the doubly flaky texture adds a nuanced bit of crunch to the softer ice cream. Additionally, croissants come in a number of flavors, from almond and chocolate to varieties like those made with pretzel bread and those drizzled with a buttery sweet glaze. Add a different kind of sweetness by pairing the sandwich with blueberries or strawberries.

Get started on your own career as an ice cream sandwich scientist by enrolling in culinary academy.