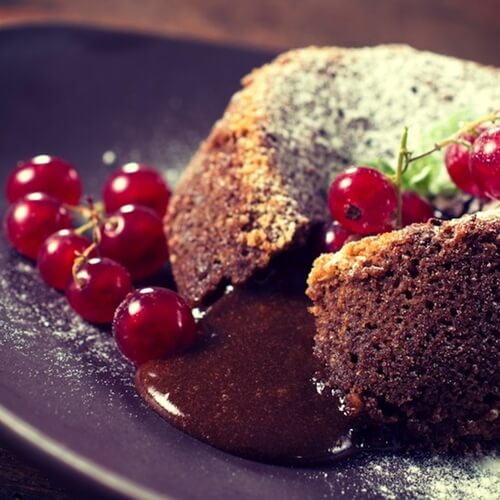 Hot, Hot, Hot: Lava Cakes That Everyone Will Enjoy

The famed French chef Jean-Georges Vongerichten is widely credited with inventing the decadent wonder that is the molten lava cake. However, restaurants across the U.S. serve their own versions of the remarkable dessert, experimenting with additions to the surprisingly simple list of ingredients. Baking and pastry students should include this modern classic in their repertoire and then try out their own creative variations.

For your first lava cake, stick to an old-school recipe like the one provided by the New York Times. Start by combining half a cup of hot, melted butter with four ounces of chopped semisweet chocolate. Stir until melted.

In a separate bowl, crack two eggs, and then add two more yolks without their whites. Beat in a quarter cup of sugar for about a minute. Pour the egg mixture into the chocolate, beating until they combine.

Butter and flour four ramekins before splitting the batter between them. Set the ramekins on a rimmed baking sheet, and place them in an oven set to 450 degrees Fahrenheit. Bake for up to nine minutes, watching for the cakes to puff up and the tops to set.

Rest the cakes for one minute before setting them on plates by inverting the ramekins. Wait 10 seconds before removing the dishes. Top your lava cakes with ice cream or whipped cream, and serve.

Once you’ve mastered the basics of the molten lava cake, it’s time to explore more intriguing flavors. One great way to take your dessert to the next level is with the irresistible combination of chocolate and peanut butter. Lemon Tree Dwelling provided directions for this amazing concoction.

Combine a tablespoon each of flour and cocoa powder, coating six ramekins with melted butter and the mixture. In a saucepan, melt another stick of butter and four ounces of baking chocolate. Then, mix peanut butter, softened butter, powdered sugar and cinnamon in a bowl.

Use a mixing bowl to beat together three eggs, granulated sugar and vanilla. Fold in the melted chocolate with a quarter cup of flour. Divide the batter and peanut butter mixture among the ramekins, placing a layer of chocolate at the tops.

Position the ramekins on a baking sheet, and then bake at 425 degrees for up to 15 minutes. Once the tops crack and the edges become firm, transfer to a wire rack to cool. Invert onto plates and dust with powdered sugar before serving.

“Bring seasonal tastes to your lava cakes by including fruit.”

Melt together white baking chocolate and half a cup of butter. Stir in flour, salt and powdered sugar, followed by four eggs, four egg yolks, lemon curd, lemon zest and vanilla extract. Whisk the ingredients together before pouring into seven custard cups coated with baking spray.

Set the cups on a rimmed baking sheet and place in an oven set to 425 degrees. Bake about 14 to 17 minutes, until the edges turn golden brown. While the cakes cool on a wire rack, whip heavy cream and mix in powdered sugar.

Move the cakes onto plates, and use a piping bag to add the cream. Top with fresh berries and a mint leaf garnish.

Molten lava cakes have become an essential dessert offering at a wide variety of restaurants. Culinary academy students will learn the techniques they need to add their own personal touches to this classic item.