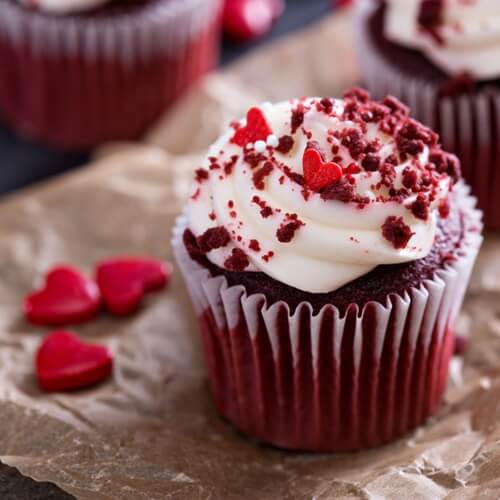 What’s The Deal With Red Velvet?

There’s no better time of year to enjoy fresh baked good than Valentine’s Day. Not only is this holiday in the middle of winter, when comforting sweets are always welcome, but it’s also been just long enough that we’ve gotten over all of the cookies and treats we indulged in over the holidays. One of the most popular sweets for the season is red velvet – whether it comes in the form of a cookie or cake. However, even some of the most seasoned baking & pastry arts students aren’t completely sure what red velvet actually is. Here’s what you need to know about the seasonal sweet:

It’s chocolate
Hate to break it to you, but if you’re one of the people who swears that boxed red velvet cake doesn’t taste like a chocolate cake, your mind is playing tricks on you. Unless your red velvet cake is made from scratch, it’s red dye that sets it apart from other chocolate and devil’s food cakes. If the cake is made from scratch, though, the subtle red coloring is a result of the chemical reaction between the cocoa powder and buttermilk. Most modern cakes don’t contain buttermilk, so this is why you might find that homemade red velvet cakes taste more savory than others. That, and the fact that they’re usually topped with cream cheese frosting!

It’s a classic Southern recipe
If you were to order a slice of red velvet cake at a Southern bakery or restaurant, you may be surprised to receive a cake with a slight red tint as opposed to a fire engine-red sugary treat. The New York Times talked to Virginia Willis, a cookbook author.

“I find it insulting on some level culturally,” she said. “It’s kind of a weird Southern cake anyway, and it’s bizarre the way it’s been appropriated.”