New England At Its Finest (Dining)

Boston is the heart of colonial America, known for its landmark architecture, deep roots in history and one of the main birth places of American civilization as we know it. But there’s something other than history that Beantown is dripping with, clarified butter to accompany the tons of fresh lobster that’s caught and brought in fresh every day. That’s the main reason why, when planning for a weekend in Connecticut for a good friend’s wedding, I decided this was the place I had to visit before heading back to the Midwest. I’ve been to New York more times than I can count, but have never ventured further North up the Eastern sea board. As you can imagine for someone who found her dream job writing for an online culinary school, food is a major part of my being. I’m pretty positive that my body runs on equal parts butter and blood. And as a Chicagoan, I’m no stranger to seafood restaurants that have the fresh stuff flown in on a daily basis to appease fish lover’s appetites like mine. But I needed to go further, experience more and taste all the fruits that one of the world’s most vast and glorious seas has to offer. So after the most picturesque wedding set in a 300-year-old barn that Benjamin Franklin once spent some time in, my beau and I headed to Boston to eat and experience as much as we could in the day and a half we had.

To our delight, our Airbnb put us right into one of the city’s most popular and happening areas, Fenway. That’s right, like Fenway Park Fenway. We were staying just a few blocks away from the stadium on a quaint, tree-lined street that. Appropriate for the master planner that I am, I had done my research on some of the best seafood restaurants in the area. I didn’t want to waste any time once we had arrived. So, after a brief walk through the Back Bay Fens Park, snaking our way through the Mission Hill neighborhood back to Fenway-Kenmore, we had worked up enough of an appetite to enjoy our first taste of the food that makes New England such a culinary hotspot.

That primary bite happened at Citizen Public House & Oyster Bar. It had the word Oyster in it. I was sold. We ordered the seafood platter for two along with our whiskey and wine, a glorious spread of 6 local raw oysters, half of a lobster, shrimp, fresh clams and steamed mussels. It was everything I had dreamed of and more. The oysters and clams were so fresh that every bite had a chaser of ocean water to go with it, enhancing the taste and overall experience. The lobster fulfilled every expectation, steamed to perfection and full of tasty, buttery meat that just melted away into my tastebuds. The mussels, however, were perhaps my favorite part with their smoky flavor enhanced by just a touch of lemon juice. If there were a record for who could eat it the fastest, I’m pretty sure we would have won it. That amazing platter was completely devoured in just about 5 minutes. We finished up our drinks and conversation and headed on for our next Boston adventure.

With spirits lifted, we wandered around the neighborhood some more, remarking at the stunning architecture (it really is incredible) and how good of shape Fenway Park is in compared to our own baseball antiquity, Wrigley Field. I guess a couple more winning series will do that for you. We walked ourselves into another hunger which lead us to another Boston antiquity of sorts.

Tasty Burger had everything you’d want in a burger bar but with the young and hip vibe that mirrored the quickly growing neighborhood. Cement floors and glass garage doors capitalized on the industrial chic look while the food served up classics at seriously reasonable prices. We started with the onion rings, which were cut thinly, battered and fried to perfection. They were quickly devoured. French fries followed next and before we knew it we had finished our beers and were taking a chili cheese dog and a cheeseburger to go. If there’s a time and place for two dinners, it’s vacation. If there’s another thing to do on vacation, it’s eat a cheeseburger in bed.

The next day was our only full day in Boston and we used it to the best of our ability to experience as much as we could….through our stomachs. We started our day with crepes from a spot around the corner called Neighborhoods. Although not quintessentially Boston, the crepes accompanied with locally roasted George Howell coffee gave us the certain “je ne sais quoi” that we needed to start our day. Some shark watching (I’m obsessed with Jaws) and a long walk on the beach was the perfect way to work out a hefty appetite for some Boston beer, so we ventured onto a tour of the Harpoon Brewery situated right on the harbor.

Founded in 1986, Harpoon was the first brewery to bring craft beers to the city of Boston. In less than 30 years, they grew their company from only a portion of an old Navy warehouse nestled among fisheries to using the entire thing. They’ve gone from distributing to a couple local bars to 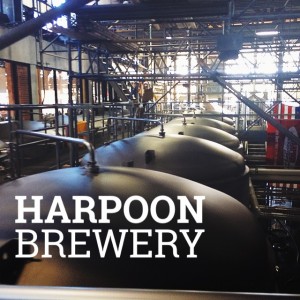 26 states. They’ve gone from one brew, the Harpoon Ale, to tens of revolving IPA’s, porters, stouts, ales and ciders. The tour itself was refreshing
and enlightening. The guides had energy and were passionate about what they did. Seeing the way a brewery works never ceases to amaze. The sampling time is quite nice too. Can’t deny it. We were basically given 20 minutes to sample as much as we could and let’s just say, we did quite well. Every one of the 12 or so beers had different complex flavors, each one seemingly more delicious than the last. It was one of the highlights of the day that had just begun. But what really led us to the Harpoon Brewery was one of those little fisheries right down the street. Drinking all the beer had worked up quite an appetite, so we excitedly ventured on to our next destination.

The Yankee Lobster Company, just about 200 feet from Harpoon Brewery, had just what I needed. It had what I had come to Boston for. It had it and I really, really wanted it. The lobster roll is really something of a myth in the Midwest. I’m sure there’s some restaurant somewhere in the Chicagoland area that makes them. But it just doesn’t compare to lobster that’s been pulled off the boat, immediately cooked, tossed with some mayo, thrown on a toasted bun and placed right in front of you. And when I say lobster, I mean 1.5 pounds of the best claw, knuckle and tail meat in the country. If it’s done right, or so I’m told, there’s very little on it so you don’t hinder the natural taste of the crustacean. The Yankee Lobster Company is continually ranked as having one of the best lobster rolls in the city. I saw how they dressed it, read about the company and decided that would be where I would have my first. We splurged and got the lobster mac & cheese to accompany the roll as well as a Harpoon Pumpkin ale to enhance all the deliciousness. Lesson learned: there is no such thing as too much lobster. One bite in and I was hooked. It was absolutely everything I hoped it would be and more. Everything about the trip and my life in that one moment had been confirmed. I took far more bites than one who is supposed to be sharing should and before we knew it, everything was gone. As you can imagine, one needs to sit a bit after eating that much so sit we did. We sat in the sunlight, breathing in the harbor air and finishing the Harpoon Pumpkin Ale we had gotten to share. If I had to pick my heaven on Earth, that’s what it would be.

The rest of the day was filled with historical sightseeing (hello, Paul Revere House and Cheers bar) with a little bit of lounging until we ventured onto the last part of our day: attending a Red Sox baseball game. The stadium was nearly packed with diehard fans even though the team has been performing less than satisfactory this season. It’s here, and it really wouldn’t have been the same without it, that I heard my first and only authentic Boston accent from the lady sitting to my right. We enjoyed a Fenway Park Frank, a couple of Bud Lights and sang Sweet Caroline in the middle of the 8th inning. We topped off the night with another visit to Tasty Burger, this time trying the Big Tasty, and took in all we could of the last moments we had of the Cradle of Liberty.

As we caught our plane out the next morning, tummies still full of delicious food and hearts bursting with soulful indulgence, I could only think of one thing, “I’ll be seeing you again, Boston. Really soon.”