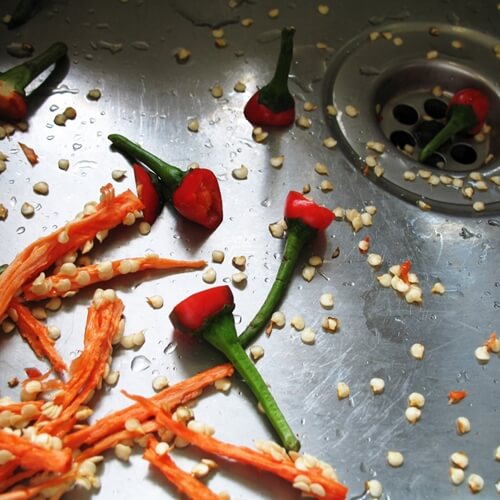 3 Chili Sauces To Substitute For Sriracha

There’s no denying that folks have had quite the love affair with Sriracha in recent years. As the Los Angeles Times reported, sales of the spicy chili sauce hit a record $60 million in 2012. Yet for all its popularity, the world is brimming with loads of other hot sauces, from the sweet and tangy to those so hot some would swear they’d melt steel. Here’s just a few of those fiery concoctions spicing up the rest of the world:

Yuzukoshō
First popularized in Japan, Yuzukoshō is widely used in various sushi plates, vegetable dishes and grilled meats, according to The Culinary Cadet. The paste itself is made from a medley of chili peppers, salt and the peels of the yuzu citrus plant; the mixture is then allowed to ferment for some time. The resulting paste, which comes out as either green or orange depending upon the peppers, is often described as being especially tart, with quite a lingering bit of intensity. For the best flavor, try using Anaheim chilies, which aren’t overwhelmingly hot and go rather well with most vegetable dishes.

Sambal
As writer Bruce Kraig explains in his book “Street Food Around the World,” sambal is so popular in its native Indonesia that there’s some 300 different varieties. At its base, the paste includes a mix of onions, basil, garlic and shallots, though some recipes call for sugar, lime and ginger. The variety, then, comes from the variety of additional ingredients mixed in, which can range from anchovies to fermented durian fruit. Still, the two most popular options are sambal oelek, often a starting base made from red peppers, and sambal bajak, a salt-free variation with a slightly sweeter taste.

Piri piri
​Piri piri, sometimes referred to as pili pili, is made with the African red devil pepper. Taste Defined called it one of the 10 spiciest chillies in the world, with a Scoville scale of 175,000 (habaneros, for context, land between 100,000 and 375,000). Popular in its native Portugal and several parts of Africa, piri piri involves the blended pepper being mixed with oregano, garlic, basil, black pepper, and onion, resulting in a flavor that Hot Sauce Fever notes as rather light and herbal. Though used most often on chicken, piri piri has a number of other applications, including seafood like shrimp and flounder, various breads, pizza and the bife ana, a kind of steak sandwich featuring mixed greens.

No doubt there’s plenty of time to experiment with these spices after enrolling in culinary academy.