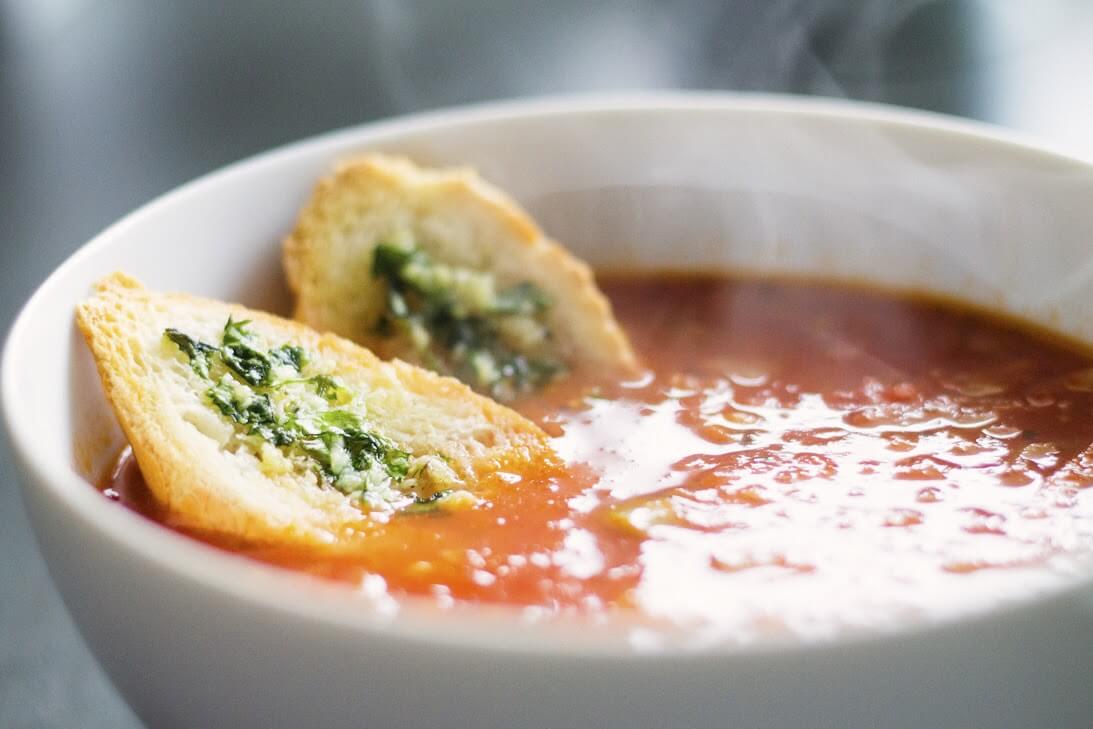 If you live in the colder parts of the U.S., you know that there isn’t much to look forward to in the month’s long stretch of dreary days, crippling snow storms and chill you to your bones temperatures that winter brings with it. Luckily, there is something to reverse all of the terrible effects that come with living in cold country and it comes in the form of an easy four letter word: soup. Did you think we were going to say “move?” There’s that too but we’re an online cooking school after all! Anyway, back to the subject at hand. Soup is a part of just about every single culture in the world. Do you know what that means? That means there are thousands upon thousands of amazing soup recipes for you to try, tasting a bit of the globe as you go along. Plus, one of the best things we have found about soups is that they’re open to tweaking to fit your wants and needs. As we know, some of our most favorite recipes have been created that way!

That’s why we’ve included a couple of our favorite soups to help keep you warm and healthy during those long winter months. And please, feel free to slightly tweak the recipes to fit any food allergy, gluten-free, vegan or vegetarian needs!

One of the main reasons this soup made our list is because it requires just a couple of ingredients and very little prep or cooking time. As much as we love digging our hands into an all-day feast, we also appreciate the delicious simplicity that this recipe offers. For the nights you just don’t have the time or the energy, let there be soup. We’ve tried this recipe a million different ways, with a lot of leek, with a little leek, with chicken broth for a dairy-free option, with the potatoes pureed and with them diced, there’s really no way you can go wrong with this soup. Serve hot garnished with some chopped green onion and you’ll be as happy as a leek at the beach.

Perhaps the best thing about this vibrant soup is the fact that the roasted red peppers do all the work. They’re brightly flavored, colorful and the perfect base for a soup that won’t need much else going on. In a pinch you can vouch for the jarred ones or you can roast your own. Up to you! Throw some chicken broth and cream in or some vegetable broth and soy milk for a vegan recipe. Puree it all together with a blender and top with some fresh chopped chives for a delicious soup that’s high in Vitamin C!

Few things say let’s get cozy and comfortable than a slow-cooked beef stew filled with root vegetables. Slow cooking the meat makes it so tender it falls apart and also allows you to extract all the flavor. Throw in some carrot, onion, turnips and parsnip, tomato paste and a dark beer (like a stout) for added flavor, let it cook for a couple of hours and let those delicious smells make their way through your entire house. It also makes for a great crock pot meal. Throw all the ingredients in the morning of, turn it on low and breathe a sigh of relief when you get home and dinner is already done.

This soup is seriously the best. Legumes make for a great meat substitute since they’re full of good proteins and fiber whereas all the veggies compliment them just right. We love to throw in some chopped tomatoes, carrot and onion but have also found great success with turnips, parsnips, green beans, ginger and even some sautéed bacon (for a bit of extra flavor love). One thing this soup absolutely cannot live without (besides the lentils, of course) is the cumin. Must have cumin. If you’re feeling up for it, try toasting cumin seeds and then grinding them up. It’ll make all the difference.

The name pretty much explains it all. This simple soup has the flavor of something more complex without all the hassle and work. We recommend doing Andouille sausage for its bit of extra flavor and spicy kick but some plain old kielbasa works too. Kale can also be subbed in for any leafy green, like swiss chard or spinach, but we just love how the texture holds up. We’ve also been known to throw in a can or two of kidney beans for added texture and filler (and lovely pop of color). Either way, this soup is a real winner and naturally gluten-free. It can also be done in 30-45 minutes, prep and everything. Gotta love soup season!

Method
1. Cut the sausage into ½ inch thick rounds. Heat non-stick pan on medium heat and add about 1 tbsp olive oil. Add in the sausage and let cook, stirring occasionally, until slightly browned. Using a slotted spoon, remove sausage onto a plate and reserve for later.
2. In the same pan you cooked the sausage, add the onion and cook for about 3 minutes or until sweating. Add in the garlic and let cook for an additional 1-2 minutes.
3. When onion and garlic are done cooking, add in the broth, potatoes and kidney beans. Bring to a boil and then cook on low for about 15 minutes or until potatoes are tender. Once potatoes are tender, add in kale and sausage and let cook for an additional 5 minutes or until kale reaches desired consistency.
4. Season with salt and pepper to taste and serve hot!

Do you have a killer soup recipe?! Share it with us!