You put it on juicy burgers, shred it on top of steaming bowls of chili, pair it with sweet apples, and mix it into macaroni. But do you know where cheddar cheese comes from?

While cheddar can now be found throughout the world and is one of the most popular types of cheese in the United States, it didn’t start this way. Keep reading to learn about the origins of cheddar cheese and how its popularity has grown since it first appeared.

The Origin of Cheddar Cheese

It’s hard to imagine a time without cheddar cheese, but that time did exist. In fact, nobody had tasted this cheese until the 12th century!

Historians believe that this beloved golden cheese was first created in the village of Cheddar in Somerset, England. Some people say that a milkmaid forgot about a pail of milk and returned to find a pail of cheddar, but this origin story isn’t confirmed. No matter the case, once cheddar cheese was created, it quickly took off.

After English nobles got word of the cheese, it became a necessity at many royal banquets. In fact, King Henry II purchased more than 10,000 pounds of cheddar in 1107, declaring it the best cheese in Britain. Henry’s son, Prince John, continued to serve cheddar cheese during royal affairs.

How Cheddar Cheese Is Made

Cheddar cheese begins just like all other cheeses do–with milk. Cheesemakers heat milk and then add rennet (enzymes from the stomachs of mammals like goats and sheep) or an acidic substance like citric acid or lemon juice to the liquid. This causes the milk solids to form into curds. After heating the mixture a bit longer, cheesemakers separate the curds from the whey to form a mass of solids.

At this point, cheddar takes a turn away from many other cheeses. Cheesemakers form the curds into blocks and then stack them on top of each other to allow excess whey to drain. By restacking and turning the blocks over time, all of the curds are able to dry out equally. This stacking and drying process is known as cheddaring.

After the curds reach their desired dryness, they are chopped and mixed in a process known as milling. During this step, cheese makers also add salt to help the cheddar flavor sing.

Next, the curds are formed into their desired shape, whether that is a wheel, block, or some other shape. Originally, the outside of the cheddar was heavily salted and then coated in a layer of butter. This kept the cheese’s moisture in while also keeping excess moisture out. When cotton became readily available, cheesemakers began forming cheddar into wheels and wrapping it in lard-coated cheesecloth. While some small-batch cheesemakers still wrap their wheels in cheesecloth, wax or plastic are now used more often.

After the cheddar is properly sealed, it’s left to age. The time spent aging affects the sharpness of the cheese, as well as any nuanced flavors. Mild cheddar is typically aged for a few months while extra-sharp cheddar can be aged for over a year! 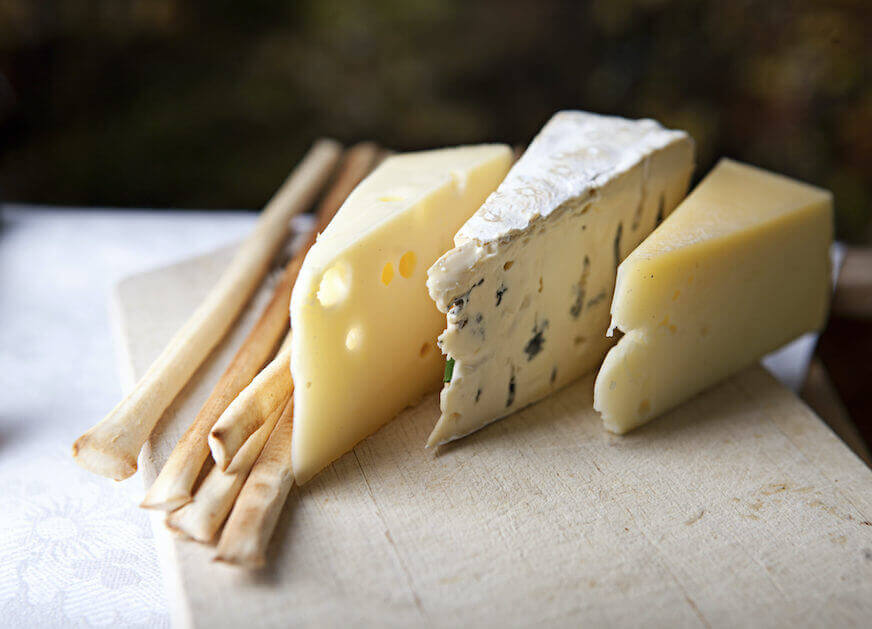 What About White and Orange Cheddar?

If you know the basics of cheese, you’ve probably come upon both white and orange cheddar. And if you’ve tasted the two side-by-side, you might have wondered if there’s any difference besides color.

Your taste buds aren’t lying to you–the differences are mainly aesthetic. White is the natural form of cheddar, but a natural dye called annatto is sometimes added to turn the cheese orange. Annatto comes from the seed of the achiote tree.

Cheesemakers first added annatto to distinguish where the cheese was made. In the United States, cheddar made in New England kept its natural white color, while cheddar made in the Midwest was tinted orange with annatto.

How to Select the Best Cheddar

With so many different types of cheddar out there, it can be difficult to determine which is the right one for you. Which level of sharpness do you choose? Should you opt for white or orange? Is cheddar from England or Wisconsin better? Before you make your selection, think about how you’ll be using your cheese.

As mentioned above, the aging process affects the cheese’s sharpness. A mild cheddar will have buttery flavors with little complexity. Sharp or extra-sharp cheddar will have a more complex flavor, with nutty, tangy, or fruity notes. Some sharp cheddars also develop crunchy calcium lactate crystals that provide a fun eating experience, but not much flavor. More mild cheddars also tend to have a higher water content, which means they melt at lower temperatures than their sharper counterparts.

Sharp cheddar typically holds up well to bold flavors present in dishes like spicy chili while mild cheddars work well in cheese-forward dishes like macaroni and cheese. However you use your cheddar is ultimately your choice!

As far as origin goes, a Wisconsin cheddar is not “better” than Vermont cheddar or an English cheddar, and vice versa. The origin can impact flavor, but you can also find a diverse array of cheddars emerging from each location.

Learn How to Make the Most of Cheddar

Now that you know the origins of cheddar as well as the differences between the types, it’s time to pick up some cheese and get cooking! If you still need a little help learning about other ingredients or figuring out how flavors work together, online cooking classes may help you out.

If you find you want to take a deeper dive into culinary education, consider culinary school! Escoffier offers both on-campus and online options, making it easier for you to find a way to fit school into your life.

To learn more about food and drink, take a look at these next:

This article was originally published on March 19, 2014, and has since been updated.