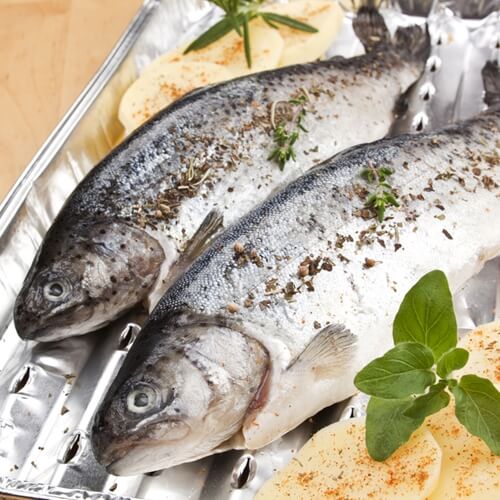 When it comes to cooking and preparing fish, there's a number of widely accepted approaches. These include broiling, smoking and even serving the fish raw in sushi. However, as is the case with many other dishes, taking a different culinary approach can often change a meal's flavor profile and re tool people's perceptions. Here is a few innovative ideas from chefs who are making strides in the kitchen.

Roast the entire fish whole
The folks at Serious Eats are aware how stressful it can be to cook fish, as some chefs are more experienced in preparing beef and chicken. To address this, they suggest just buying and cooking an entire fish. For one thing, you'll be able to better judge the overall quality; for instance, if the eyes and gills are bright and plump, then the fish is relatively fresh. The whole fish is also much easier to cook than filets, as you can prepare it similarly to a whole turkey or rack of ribs. After gutting and scaling the fish (something fishmongers could do at the market), let the fish soak in salt water for 30 minutes as to rehydrate the skin. From there, the best approach is to apply oil, salt and a special rub (anything from oregano to garlic works) before cooking the fish at 135 degrees Fahrenheit for an hour. To judge overall doneness, the fins should remove easily. Roasting is not only relatively fast, but it also helps to activate flavors and ensure a more thoroughly cooked fish.

A new spin on an old technique
Similarly, chef Mark Usewicz has a novel approach to preparing fish, adapting a method he learned in chef's school by using a heavy skillet. In an interview with the New York Times, Usewicz revealed that most fish can be cooked in five minutes, usually at 400 degrees Fahrenheit, on the stove top; the only reason most restaurants use the oven afterwards is to keep the fish warm and make room for the table's next order. Since that's not an issue for non restaurants, the brunt of the work comes in the prep work. Usewicz and many of his colleagues rely primarily on a two-pronged approach. First, the fish is cooked in an oil that can handle high heat, namely canola or grapeseed, usually no more than a few teaspoons. From there, Usewicz introduces his secret weapon, butter, which acts as both a tasty sauce and provides the fish with a rich, flaky crust.

Take the French approach with poaching
For an even more exotic approach, Fine Cooking suggests poaching, a technique used in many French kitchens. Poaching involves cooking with broth, usually some kind of olive oil garnished with herbs, over very low heat, usually 120-125 degrees Fahrenheit. As a whole, poaching is a mostly hands-off affair after prepping: Once the fish and oil reach peak temperature, place the pan in the oven for 25 minutes. Even with the inherent ease, there's still a few things to be aware of. One, the type of fish does matter for taste and flakiness; for instance, salmon and tuna have a great surface texture that's built for absorbing flavor. Also, don't be too worried about time: Because the fish cooks slow enough, there's less chance for overcooking or burning. When done, strain the remaining cups of oil, refrigerate in plastic containers and use for your next fish poach.