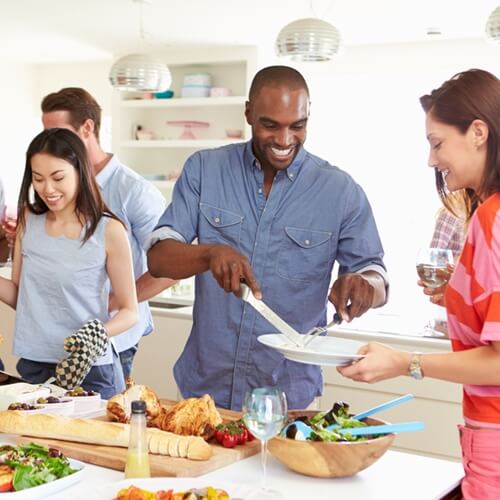 With the new year comes 365 new days of opportunity. If you’re taking online cooking courses, food is probably a huge part of your life, so why not incorporate it into your resolutions? There are countless new things to try when it comes to serving and preparing meals, so make 2016 the year of experimenting,

Learn a new recipe every month
We’re all guilty of having a few “fall back” meals that we serve every week or so, whether you want them or not, just because they’re easy. Dishes like meatloaf, grilled chicken and spaghetti tend to fall into this category. There’s no shame in having a few go-to’s, but take 2016 as an opportunity to master a new recipe once a month. Get good enough at a dish to make it quickly, and add it to your rotation. By the end of the year, you’ll have 12 new recipes to cycle through and your old go-to’s will be as exciting to eat as they were when you first began to make them.

Waste less food
Wasting food is a huge issue in this country and if everyone made an effort to waste less in 2016, it would make an even bigger impact. While you can’t make everyone waste less food, you can do your part by allowing less of your own food to go uneaten. Begin by planning your meals for the week before you go grocery shopping, making smaller portions – unless you plan to eat the leftovers and composting the food that you don’t eat. You’ll waste less and save money in the long run.

Have a dinner party
If you learn to cook online, you’ve probably been dying to show off your new skills. Do that by hosting a dinner party! It doesn’t have to be for a special occasion; you can have a party just so you can cook and socialize. Bust out that old phone book, get back in touch with old friends and invite them over for a home-cooked meal.

Bring out your slow cooker
We all talk about the wonder that is a slow cooker, but it’s probably still underutilized in your kitchen. Learn to prep your favorite meals ahead of time so you can just dump them in the slow cooker before you go to work. It’s a machine that literally cooks for you so you have a hot meal waiting for you when you get home. What’s not to love?

Make some condiments
Making your own condiments is surprisingly easy, and a lot of them can be made with ingredients that you probably already have in your pantry. When you make your own condiments, you’re cutting out all of the processed nonsense that fills store-bought sides. Most homemade condiments even taste better than those from the store.